Grey Sister by Mark Lawrence
My rating: 4 of 5 stars

An action-packed sequel that offers relatable commentary about faith, corruption, authority, and family.

So far, this is the highest and the most positive rating I ever gave to Lawrence’s middle-book installment; I gave both King of Thorns and The Liar’s Key 2.5/5 stars. I am very pleased to say that I loved Grey Sister. Even though I loved Red Sister more, Grey Sister was another great volume for the series and depending on how I feel about the third and final volume, Book of the Ancestor could actually end up becoming one of my favorite trilogies.

“The understanding that power corrupts is an idea older than the language we repeat in. All of us in positions that afford authority over others are susceptible, be we high priests, prime instigators, even abbesses.”

Grey Sister takes place two years after the bloody conclusion of Red Sister. Nona Grey was in Red Class and Grey Class in the first book, the first half of this novel continues the wonderfully-written magic/battle school trope by showing Nona’s journey in the Mystic Class. Nona is now fifteen years old in this book, one of the things that Lawrence did spectacularly is making sure that Nona’s inner narrative voice stayed and changed realistically according to her age. Her character development was superb and utterly clear; the reader will know that this is simply Nona growing up as a teenager. She’s more confident and more susceptible to anger, but deep down she’s still the same life-hardened kid we knew from the first book; kind, loyal, and she treasures friendship more than her life.

“Those novices are my friends and I would die for them. I would face a terror for them that I haven’t the courage to stand against on my own behalf.”

There were plenty of changes from the first book; most of them were great. The most significant change was how the storytelling structure turned into a multi-POV narrative. I found this to be a very clever decision. Other than Nona, Abbess Glass and Sister Kettle now have a POV to follow and I loved reading every moment of their perspectives. 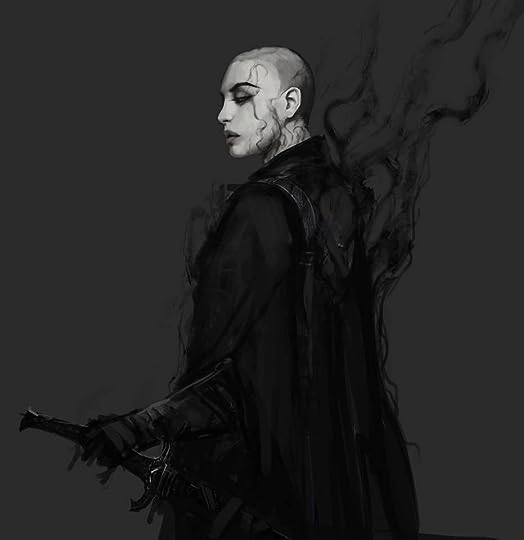 The multi-POV narrative gave better insight into the important side characters’ personality and at the same time, it added depth to how well-written the characters were. Several new side characters were also introduced, but the most fantastic one was definitely Keot. Without giving any spoiler, this character reminded me of Nightblood from Sanderson’s Warbreaker; hilarious, terrifying, powerful, mysterious, and delightful to read. Truthfully speaking though, despite the fact that I enjoyed reading Nona’s and Kettle’s story, Abbess Glass was easily the number one highlight of the book for me. I was already intrigued by her wit and wisdom in the first book, but this book enhanced it even further by giving her a POV to follow; she completely stole the spotlight of the second half of the book for me.

“The greatest threat to any faith is not other faiths or beliefs but the corruption and division of its own message.”

All that being said, there was one minor issue I had with the book: the pacing in the second half. The second half of the book took the story in a different direction by moving away from the school setting. This storytelling direction was mostly wonderful because it shows the world outside of the convent more. Plus, the second half gave more revelations on the world-building and history of the world; at the same time adding more mysteries to be answered in the last volume. However, almost the entirety of the second half was non-stop action scenes, this was especially true for Nona’s time in Tetragode. Although the action itself was well-written and Lawrence did slip in Abbess Glass’s POV for a change of pace in the narrative, I found myself feeling bored by Nona’s time in Tetragode.

“It’s when your power is taken, or given, away that you discover who your friends are, brother. There’s a lesson for us all in that.”

The climax sequence of this book, however, proves to be as brilliant and tension-packed as the concluding battle in Red Sister. With great characterizations, world-building, and beautiful prose, Grey Sister ended up becoming a terrific sequel that will push me to start Holy Sister as soon as possible, and I’m going to prove that by starting it now.

“There are many poisons that will induce madness but none perhaps quite so effective as love.”