A Feast for Crows by George R.R. Martin
My rating: 3 of 5 stars

A Feast for Crows was quite good but it’s far below the incredible standard set by the previous three books.

I’ve mentioned in my previous review that A Storm of Swords could truly be the height of Martin’s writing career and I still stand by that statement confidently. Unfortunately, there’s a huge chance that this book will be the other way around by being the lowest point of the series. There’s a lot of circumstances to consider here. If I’ve waited 5 years before I read this book, I definitely would’ve hated it and give this at max 2 stars rating. If I haven’t received any warning on the odd structure of the story and character’s POV choices, I most likely would’ve disliked it more. If I haven’t watched the TV series, I probably would’ve enjoyed or disliked it more. And if I haven’t read A Knight of the Seven Kingdoms or in the midst of reading The World of Ice and Fire, again, I most likely will dislike this book even more. Putting all circumstances into consideration, my experience of reading A Feast for Crows wasn’t as bad as I thought it would be but it was truly a disappointment after the brilliance of the previous book.

Picture: A Feast for Crows by Marc Simonetti 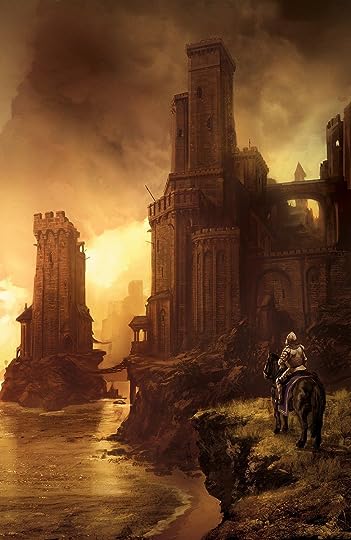 I don’t think there are any new pros or cons about this book I can convey in my review. Everyone who’ve read this installment will know what my problems with it are. Let’s start with the odd structural choices that Martin chose. In any kind of series, when you write a direct sequel, it’s simply insanity to not have the main characters (unless they’re dead) in it, especially when the main characters are pretty much majority of the reader’s favorites. Well, Martin did exactly that. He left out the main characters for the next book instead. To make things even worse, the characters that he focused on here are mostly uninteresting side characters. In my opinion, the chapters that don’t feature any character’s name as the title in this book were just maddeningly boring; specifically the Ironborn and Dorne storyline.

“Words are like arrows, Arianne. Once loosed, you cannot call them back.”

Reading the Ironborn’s story was easily one of the most boring and cringe-worthy experience I’ve ever had in reading fantasy. Who cares about the Ironborn anyway? “What is dead may never die,” is a stupid catchphrase. Try telling that to Reek’s dead cock and see if that would mean anything. I’ve also heard from a lot of book purist that the TV series butchered the Dorne’s storyline. What is there to butcher when the story is super uninteresting already? I haven’t read A Dance with Dragons but from what I’ve read so far, the Ironborn and Dorne storyline was utterly boring and uninteresting. Finally, there was also a major problem with pacing. Despite this book being the smallest in word counts, there was a myriad of content that simply didn’t add any value to the story or characterizations; the book could’ve been shortened and it most likely would’ve made for a better reading experience.

“He was beastly tired, but it was hard to stop. One more book, he had told himself, then I’ll stop. One more folio, just one more. One more page, then I’ll go up and rest and get a bite to eat. But there was always another page after that one, and another after that, and another book waiting underneath the pile. I’ll just take a quick peek to see what this one is about, he’d think, and before he knew he would be halfway through it.”

That said, I was still able to finish the book in four days. I have always love Martin’s prose and his talent in characterizations—even though most of the central characters here were uninteresting—was still great. The two Lannister featured as the main POV in this book—whether you love or hate them—was superbly written. The world-building remained intricate and although it wasn’t as expansive as the previous three books, combine with the knowledge attained from reading A Knight of the Seven Kingdoms and The World of Ice and Fire made me realize just how damn difficult it is to write this series. I also really wish that the TV series adaptation kept Lady Stoneheart; she appeared briefly near the end but her appearance completely spiked the intensity of this book. Finally, the last chapter of each character here was incredible and shows Martin’s terrific capability as a storyteller. However, I’m telling you now that all of them ended in quite a huge cliffhanger.

“History is a wheel, for the nature of man is fundamentally unchanging. What has happened before will perforce happen again.”

Overall, as I mentioned above, despite my enjoyment of reading Martin’s prose, A Feast for Crows ended up being a downgrade for A Song of Ice and Fire. If I’ve waited five years for this book and went into it without any knowledge on the awkward structural choices, I’m sure I would’ve been severely disappointed and rated it worse. One book left, A Dance with Dragons awaits me. Once I’m done with that, I’ll be joining every reader’s wait for The Winds of Winter.