Angus Macallan is a pseudonym for Angus Donald, a historical fiction writer most well-known for The Outlaw Chronicles series. Gates of Stone, the first book in Lord of the Islands series marked his first foray into the fantasy genre. When I first stumbled upon this book on Twitter, I was utterly filled with joy and disbelief that someone actually wrote an epic fantasy inspired by my home country. And it’s real and not a joke; Macallan cleverly utilized his skills as an author of historical-fiction into creating a powerful beginning of an Indonesian-inspired epic fantasy series.

The two main characters of the book are Katerina and Prince Arjun. Just before her sixteenth birthday, Katerina, the rightful heir to the Empire of the Ice-Bear was denied her ascension solely because of her gender. As such, Katerina was determined to scour the tropical islands of Laut Besar in search of vast power and wealth to regain her rightful inheritance. As for Jun, his peaceful life was shattered when a malicious sorcerer came to his island, slaughtered everyone and stole the ancient sword in his father’s possession. Jun then decided to track down the sorcerer and reclaim the ancient weapon, which apparently was one of the Seven Keys required to unlock a devastating power. Although the two main characters are teenagers, their stories contain trigger warnings for rape, gang rape, and some gore.

There is a marked contrast in the personalities and character development of the two main characters. Katerina exhibits brutality and tyranny; her determination to not let anything stand in her way resulted in gruesome cruelty. She started off as terrifying and intimidating but as the story progressed, we get to see the depth of her personality peeled off layer by layer. Jun, on the other hand, was almost the complete opposite of Katerina in his characterization. I enjoyed the two characters’ development and storylines immensely. Admittedly, there was another side POV that took quite a while to spark my interest, Farhan. While Katerina and Jun’s storylines started with characterization over action sequences, Farhan’s POV featured tons of battle scenes right from the beginning with very few breaks in between. This isn’t necessarily a problem; I would imagine that anyone who prefers faster-paced narratives with action sequences introduced early on may enjoy his story a lot. However, as I’ve mentioned this in almost every review of mine, I’m a reader that places the utmost priority on characterization. It’s not until around 70% of the book that I was finally invested in Farhan’s story. Luckily, even though Farhan’s POV didn’t really click with me, the other two main characters were more dominantly featured.

Macallan’s prose and action sequences were incredibly engaging and easy to follow. It doesn’t matter whether it was naval battles, close-quarter combats, magic, or sieges, Macallan delivered his vivid and visceral action scenes. I believe that his ability to write such great action scenes was one of the two skills stemming from Macallan’s experience as a historical fiction author; the other is world-building.

Generally, I’m not a fan of reading a high fantasy that takes place on the same world like ours but I found the originality and intricacy in the world-building to be my favorite part of this book. Obviously, I’m a bit biased because I’ve been living in Indonesia since I was born. However, even without being an Indonesian, the book’s setting was highly original for an epic fantasy and its Indonesian inspirations were absolutely spot-on. The islands, the jungle, the fauna, the weapons, the terms, the names, the clothing, and the lore; I can’t possibly talk about each of them in detail without adding on at least an extra thousand words into this review. I’ll just list some of these Indonesian influences:

Picture: The World Map in Gates of Stone 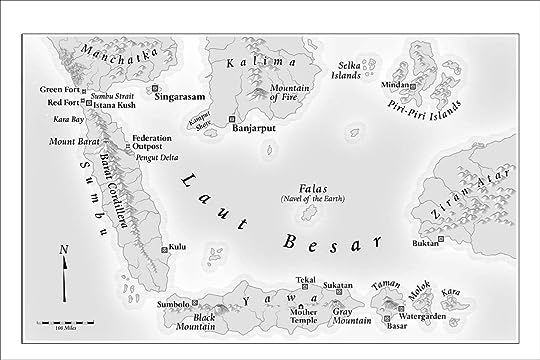 I purposely left some out, but if you really want to know the meaning behind the other terms while reading this book, do feel free to message me and I’ll answer your query the best that I can. Indonesian influences aside, other Asian influences from China, India, and Japan were also evident. Macallan imbued noteworthy Asian influences into his work with due justice. As an avid fantasy reader and a Chinese born, raised, and living in Indonesia, and one who also loves Japanese cultures, I truly applaud Angus Macallan for the courage to write something original and different from the other current mainstream fantasy.

Gates of Stone is a uniquely great and impactful start to an epic fantasy series. Thank you, Angus Macallan. I’ve read many fantasy books over the past two years, and I’m pretty sure I’ve never read any with a setting and lore like the one in this book. With Gates of Stone, Macallan has established that he’s here to stay in the fantasy genre.

You can buy the book with free shipping by clicking this link!