Beware this review contains one spoiler from Theft of Swords.

Rise of Empire was definitely the turning point for me, where I finally saw all the potential of the series and so I knew from the first chapters that this would be a favorite series after all.

Just like Theft of Swords, Rise of Empire includes two books: Nyphron Rising and The Emerald Storm. So, again, this review will be divided into two parts. 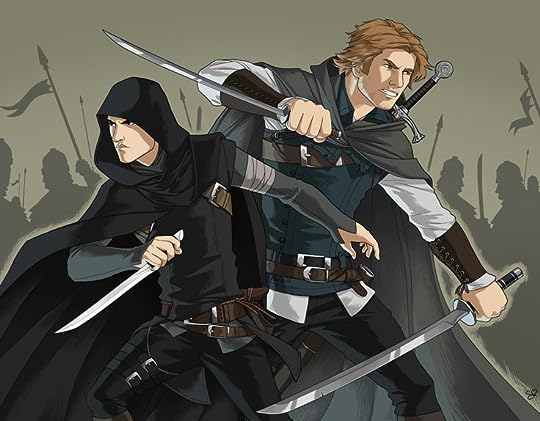 Nyphron Rising
The events of the first book take place a few months after Avempartha. Arista, princess of Melengar trusts Riyria with a new delicate mission, while the new Empire is spreading, threatening her kingdom and gaining power, influence and territory.

I left Arista from my review of Theft of Swords on purpose because I knew that I will rave about her in this one. Arista is the type of female character I LOVE to read about in Fantasy. Flawed and far from being perfect, stubborn, loyal, clever and most importantly always evolving, growing, doubting, learning.

Michael has a unique talent at writing astonishing and well fleshed out female characters. All the female POVs were different, with distinctive voices and providing a lot of insight into the ladies’ thoughts and doubts and memories. I was enthralled by their chapters as they made a difference and actively took part in the events surrounding them. But they also introduced and interacted with many interesting and amazing side characters: Ibis, Nimbus, Emery, Hintindar’s villagers…

In Rise of Empire, Hadrian shares the favorite spot with Arista (and has ascended to my top 3 of favorite character of all time since my first read). Hadrian is the embodiment of the type of hero I crave to see in epic Fantasy: honorable, idealistic, honest, good-natured and loyal to a fault. I loved getting to know more about his past, his motivations and his lineage. I loved to have more introspection in his POVs where regrets and dreams intertwined and gave birth to one obsession : finding and fulfilling a noble goal.

When I was young, I used to think I was … well … special. I imagined that I would triumph in some great purpose, win the girl, and save the kingdom, but I suppose every boy feels that way.”

But Nyphron Rising’s strength doesn’t reside only in its amazing cast but also and foremost in the way the mystery and plot considerately thickened and became more complex as political scheming and battle tactics finally gained in importance and the stakes rose considerably.

The Emerald Storm
A huge part of the Emerald Storm takes place on a ship. God, I hate ships in books! But this is really an “It’s not you, it’s me” situation. First, the ships and sailing jargon confuses me so much and second, the action space is considerably reduced while I love open spaces and huge castles and endless forests and countryside in my Fantasy.

However, the story is really compelling in this book. More great supporting characters and mysterious and uncanny antagonists were added to the cast. Though it’s divided into 3 main storylines (Arista, Amelia & Modina, Hadrian & Royce), I felt the book was more focused on Royce this time which is great because we finally get a clear glimpse of his dark side. Hadrian’s memories continue to be told and it’s a pleasure to delve into his past and know more about him. The two partners continue to banter and have each other back and each book, reminds me why they form my favorite duo in Fantasy!

“You aren’t going to tell me, are you?”
“What would be the fun in that? This will give you something to do. You can try to guess, and I can amuse myself by insulting your intelligence.”

Conclusion
These books are a delight to read and re-read as they definitely get better and more exciting with each installment and we get to guess that there are other secrets and mysteries waiting to be unraveled! I even managed to get surprised by some twists I totally forgot about during my re-read.