Here it is, the beginning of the trilogy that sparked my love for reading fantasy novels.

It’s been exactly one year ten months since I first joined Goodreads or started reading The Final Empire for the first time; it was on September 1st, 2016. There’s no doubt that The Final Empire is an extremely important book for me. It’s not easy for me to elaborate upon this; a cliché such as “I absolutely love this book” is not enough, and the reason behind the significance of this trilogy for me will have to be postponed until I’m done with rereading The Hero of Ages. The impact that this trilogy left on my life is immeasurable, and my life before and after I finished this trilogy for the first time is a different one from each other. I predict this will happen within a week or two from now, but for now, let’s talk about The Final Empire, and why—even upon reread—it’s an absolutely incredible start to a trilogy.

Picture: The Final Empire by breath-art 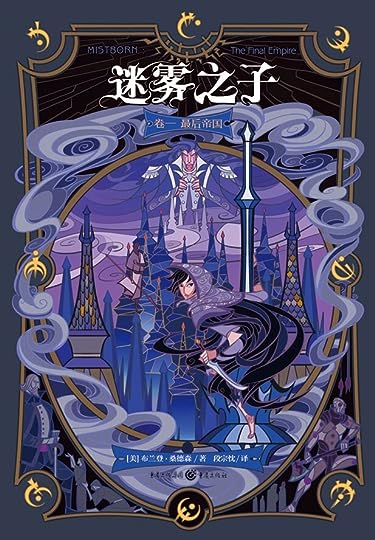 The Final Empire is the first book in Brandon Sanderson’s highly acclaimed Mistborn trilogy. For a thousand years, the world has been ruled with an iron fist by the immortal emperor: Lord Ruler. The main plot of the book revolves around a rebellion to overthrow the lord ruler; this rebellion is built around a heist led by Kelsier, his team, and his newly found apprentice—Vin. I immensely enjoyed reading The Final Empire; the first time I read this novel, I found the plot to be thoroughly engaging, relatable, and at times humorous due to the character’s camaraderie and banter. And I was also completely fascinated by the world-building and magic system that Sanderson has created here. On reread, all of these are still true, but there’s a new additional superb quality: all the foreshadowing and hints are now laid bare for me to see with the gift of hindsight. The Final Empire, on its own, works perfectly as a standalone, but trust me that there’s so much more to the story beyond this book. Everything you read here—even the mini details—played major parts in the upcoming sequels.

“Plots behind plots, plans behind plans. There was always another secret.”

Picture: Kelsier and Vin by GisAlmeida 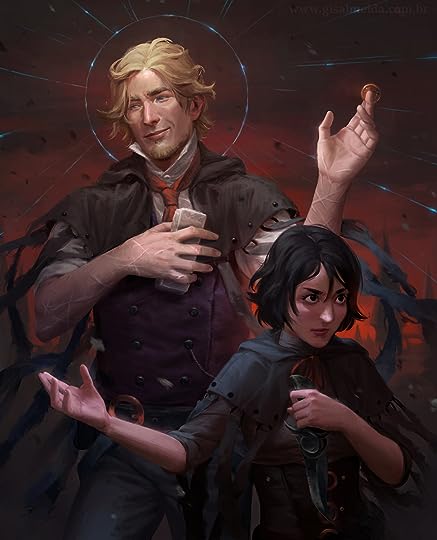 Where should I even begin with the wonderful characterizations? I guess I’ll start with Vin. I’ve read more than 200 books since the first time I finished reading this trilogy, and Vin—by the end of the trilogy—still stands strong as one of my favorite heroines of all time. This, of course, doesn’t mean that Vin was the only great character from the series; Kelsier, Sazed, Elend, and many other characters were so memorable as well. I can’t mention them all in this review because their greatness hasn’t occurred yet here. Ever since I read this book for the first time, I’ve heard from several readers that they found Vin to be incredibly emo and annoying; I disagree with this. Vin had a rough past. I think Sanderson did a great job in conveying Vin’s insecurity and emotions. Vin’s thoughts felt believable to me, and I found her character’s development to be amazing. She taught me that despite being betrayed and left behind countless times, it’s always okay—and better—to love and trust someone again rather than being alone. And then Kelsier taught me about the meaning of justice and hope; it’s not okay to stand still in the face of tyranny, oppression, and slavery.

“Men rarely see their own actions as unjustified.”

Sazed taught me that differences in faith can still lead to being respectful and kind towards each other’s beliefs.

“Our belief is often strongest when it should be weakest. That is the nature of hope.”

There were plenty of things to learn from the character’s actions in the book. But for now, I want to discuss the next highlight of the novel—and trilogy—itself: the magic system.

The Final Empire introduced us to Allomancy and Feruchemy. Honestly speaking, coming from a gaming and manga/anime background, I thought I would never encounter a magic system as good as the one often told in these two mediums within a novel format. However, I was proven wrong. Allomancy is amazing, and it’s still by far my favorite magic system in the entire fantasy genre. Yes, I think it’s even better than the one shown in Sanderson’s magnum opus—The Stormlight Archive—so far. The intricacy of the magic system that Sanderson has crafted in Mistborn Saga never ceased to amaze me, and I’ve yet to encounter a more engaging, complex, and amazingly easy-to-understand magic system in any other fantasy novels. Plus, the actions spawned from the magic system resulted in some incredibly vivid and fast-paced battle sequences.

This book was also my first encounter with Sanderson’s spectacular world-building. Accompanied with Sanderson’s accessible, vivid, and immersive prose, the world of Scadrial that’s clouded by ash and surrounded by mist felt extremely atmospheric to read. There was also a lot of well-built mystery and lore within this book; Sanderson used the epigraph at the beginning of each chapter masterfully. I’ve heard a lot of criticisms from several readers that Sanderson’s prose can be a bit too simple to their liking, and I can certainly agree that—not only this book—all of his books contain simplistic prose. However, that’s actually one of the things that I appreciate about his works. His writings never get in the way of the story, and he’s brilliantly capable of telling a story of epic proportion with his accessible writing style. And this doesn’t mean that the narrative is lacking in wisdom or impact. In my opinion, all of Sanderson’s books in the Cosmere universe contained a lot of relatable wisdom easily applicable to our daily life. A few examples:

“The right belief is like a good cloak, I think. If it fits you well, it keeps you warm and safe. The wrong fit however, can suffocate.”

“You should try not to talk so much, friend. You’ll sound far less stupid that way”

And with that quote, I realized that it’s time for me to put an end to my review here. It’s safe to say that I still consider The Final Empire as one of my favorite books and one of my favorite starts to a trilogy. My reread experience of this book has been better than I expected, and I can’t wait to see how the rest of the trilogy will hold up for me. Below here—just for fun, cringe, and nostalgia factors—is the first review I’ve ever written. Hopefully, I did a better job this time! 🙂

My first review on Goodreads and I’m really happy it’s this book that I chose. The book have an amazing world-building, great characters development and most of all, very intricate magic system and actions. This is coming from someone who’ve seen plenty of magics (not real of course) from 20 years of gaming and watching anime/movie/television series. The amount of details Sanderson put into each words (not to mention it’s really simple and easy to understand) is insane.

I will definitely read the rest of the trilogy straight after this and more works by him!