This has unquestionably become one of my favorite indie books. I’ve read 58 books so far this year, and Paternus: War of Gods is the sixth novel to receive a full 5 out of 5 stars rating from me this year. Evidently, 2020 seems to be the year where urban fantasy novels with a contemporary setting continue to surprise me; I thought the probability of them working for me was super low, but Ethereal Earth by Josh Erikson, The Dresden Files by Jim Butcher, and now this stunning final installment to The Paternus Trilogy proved me incorrect. Don’t get me wrong, I have enjoyed Paternus: Rise of Gods and Paternus: Wrath of Gods, but Ashton triumphed over the previous two books—which were great already!—and completely exceeded my expectations with this one.

“Cry havoc, and let slip the gods of war.”

Paternus: War of Gods is the final book in The Paternus Trilogy by Dyrk Ashton, and Ashton successfully imbued the word ‘epic’ into his ambitious debut series. Clocking in at 235k words and 746 pages long, Paternus: War of Gods revolves around the preparation and the climactic Maha yuga (the final war between all Deva and Asura to decide the fate of the world) itself. It pleased me to find that there was still plenty of content regarding the world-building and revelations surrounding the characters before all hell breaks loose. Essentially, the first 60% of this book—despite some battles happing here and there—was about gathering armies and both sides preparing themselves for the upcoming Maha yuga to come; I truly appreciated this section. It’s been two years since I finished reading Paternus: Wrath of Gods, the recaps of the entire series and the list of characters at the front pages of this novel, plus this “calm before the storm” first half, allowed me to reacquaint myself with the conflicts and characters of the series.

“We never know what life will bring. What course our lives might have taken if we’d made different decisions, from the smallest to the largest. If I had stayed, any number of things would have been different. Better or worse, we’ll never know.”

It has been a joy for me to witness Ashton’s rapid improvement as a storyteller. I’ve mentioned it before, I wasn’t a fan of the first half of Paternus: Rise of Gods, but Ashton has repeatedly demonstrated throughout the series that he’s an author that gets better with each installment. Zeke, Fi, Peter, all the Deva, and even the Asura have become characters that I’m very invested in. I felt that the first half of this novel was used effectively to maximize the development and personalizations of all the characters. The Twins, in particular, was a delightful riot; their well-written banter with every other character in this book was constantly entertaining. One out of many examples being:

“This is called a gladius, right?”
“It is,” says Kabir.
Cain looks askance at how Zeke holds it and waves it around. “In your hand, however, it’s more of a sadius.”

I won’t apologize for that; I love good puns, and that one was brilliant.

Also, the training montages were compelling; Zeke and Fi learning to harness their respective power were something I enjoyed, and the pacing of the story was splendidly executed. Every character was given distinctive voices to their narration; as I mentioned earlier, this doesn’t apply exclusively to the protagonists. One of the aspects of this book that astonished me was Ashton’s characterizations of Baphomet and the Asura; they amazed me even further than I already am. But get this, the characterizations and their interactions weren’t the only ones that received better treatments. Ashton’s excellent blend of mythologies/legends from around the world with his action were enhanced by at least tenfold from the previous installments.

“Most modern human beings believe themselves to be true individuals, different unique, better and above all other lifeforms and the earth itself. They have lost connection with what they truly are, and can be… We are not and will never be alone, but exist in symbioses with all that surrounds us.”

The main highlight of the novel for me, when it comes down to it, was definitely the jaw-dropping final war of the book and trilogy itself, which ended up filling the entirety of the last 40% of this huge tome. If you don’t like reading long battle scenes that went on for at least 200 pages long, I have bad news for you. There’s no escape; the arrival of the Maha yuga is unstoppable, and it demands every individual to observe this world-changing event.

“Shit happens, my boy. There wouldn’t be any good stories if it didn’t.”

Fortunately, I am a HUGE fan of well-written action sequences. It’s an all-out war, it’s blisteringly emotional, and it was insanely good. When I look back to the beginning of Paternus: Rise of Gods, there’s no chance of me predicting the scale of the series would ever soar into this level of global cataclysm. We’re speaking about total carnage and pure decimation caused by the clash of gargantuan titans, almighty gods, biblical figures, malicious monsters, and all manner of entities that numbered to hundreds of thousands here; War of Gods is an apt book title. As the Asura strives to void the existence of the world during this Maha yuga, Zeke, Fi, and the Deva face overwhelming odds that requires them to unleash every single inch of their abilities and more. There’s simply no scarcity of explosive powers unleashed in this Ragnarok-scale confrontations; the glinting ancient weapons of destruction rain deaths and carcasses, the vortex of flames brutally scours and incinerates everything in their unforgiving paths. Realistically speaking, some readers will argue that the war was too long, but I personally found it gripping and astonishing to see Ashton coordinate all the terrifically-researched mythologies into this unforgettable war. I don’t want to spoil you here—I’ve said too much anyway—but the bottom line is this: if you love massive battles, mythologies, engaging narrative, and satisfying conclusion, you have to read this book.

“This world, your world, is the only one you have, and will ever be. All human possibility, every potential for all things, lies here and here alone, within you all. Prospects for the good, as well as the bad.”

Never have I expected something as colossal as Tolkien’s War of Wrath in Silmarillion to ever be reenacted in urban fantasy, but here we are. Paternus: War of Gods is by far the most epic urban fantasy novel I’ve ever read so far. It will probably be a while before anyone—or Ashton himself—top what has been achieved for the sub-genre here. Ashton has wielded everything in his arsenal of storytelling craft to conclude The Paternus Trilogy in an incredibly explosive, memorable, and rewarding manner. I love fantasy, I love mythologies, I love wonderful characterizations, I love epic battles, and I love reading a gratifying conclusion to a series. Paternus: War of Gods has them all. This is urban fantasy at its utter best, do yourself an enormous favor and read it. If you haven’t started this series, let me ask you this:

“The memories of our loved ones cling to us after this life is done, and memories are living things that bring us strength and comfort.” 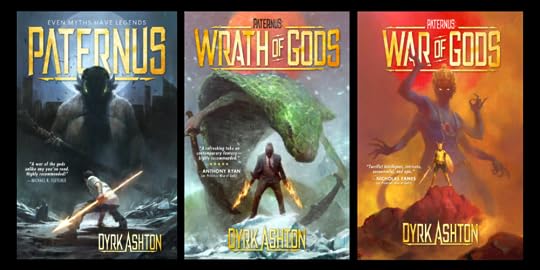 P.S:
Kudos to John Anthony Di Giovanni for creating another spectacular cover art for this series. Seriously, the entire trilogy has been graced with some of the most gorgeous cover arts—not only in indie publishing—within the entire urban fantasy.

You can pre-order the book from: Amazon UK | Amazon US