The Fellowship of the Ring by J.R.R. Tolkien

“All that is gold does not glitter,
Not all those who wander are lost;
The old that is strong does not wither,
Deep roots are not reached by the frost.

From the ashes a fire shall be woken,
A light from the shadows shall spring;
Renewed shall be blade that was broken,
The crownless again shall be king.”

As someone who’ve read more than three hundred fantasy novels, it may come as a surprise to many people that this is, in fact, the first time I managed to finish reading The Fellowship of the Ring. Honestly, there’s nothing new I can offer here; for several decades, there have been many analysts and heavy devout of The Lords of the Rings, Middle-Earth, and pretty much everything related to Tolkien. My knowledge of Middle-Earth contained only what I’ve read from The Great Tales of Middle-Earth, Silmarillion, this book, and from watching the movie adaptations of The Lord of the Rings and The Hobbit trilogy. Matched to these experts, my knowledge is just a drop in a sea of diligence. What I will write here, instead, is my personal experience; mainly on why it took me this long to finally finish reading this legendary novel for the very first time, and how much I disagree with the illusionary ‘required’ reading surrounding this series.

Picture: The One Ring by Donato Giancola 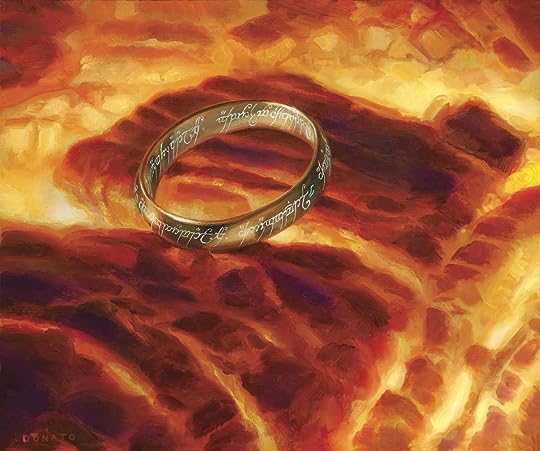 For many readers, The Lord of the Rings is responsible for being their gateway into the fantasy genre; for me, it was the one that pushed me away for years. The last time I pushed myself to read The Fellowship of the Ring was all the way back in 2012 when The Hobbit movie came out; I DNFed it because I was mindlessly bored, and before that, I have tried reading this book so many times but ended up DNF it every time Frodo met Tom Bombadil. Now now, don’t unleash your Gurthang on me yet, let’s put things into perspective first. Same with many readers, I absolutely love The Lord of the Rings movie—extended, of course—adaptations; it probably will always be my favorite fantasy movies of all time. I have watched it so many times that I lost count now; last year I re-watched the trilogy only to find myself in awe by everything about it, again. I personally think the movies did a great job of rearranging/cutting content for watching enjoyment; in comparison to the novels, they are also so much more fast-paced relatively. Obviously, it’s not fair to compare them like that because they’re different mediums of entertainment; movies will always be faster-paced than the books. However, try putting yourself in the shoe of someone who wasn’t keen on reading novels—I haven’t found my gateway into fantasy novels yet back then—and have known about the main plot of the series from watching the movies so many times, being put into reading The Fellowship of the Ring that’s verbose; it was the opposite of enjoyment, it was boredom. Back then, I found that the forming of the Fellowship of the Ring brotherhood and their adventure took way too long to reach because I’m much more used to the pacing of the movies.

Picture: The Fellowship in Hollin by Donato Giancola 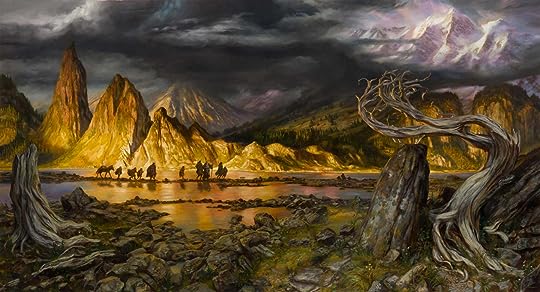 Then, I kept hearing from many fanatics that “you’re not a fantasy reader/fans unless you’ve read and loved The Lord of the Rings!” and not gonna lie, it pushed me off the genre for years; I thought reading epic fantasy novels wasn’t for me because of this statement. I will disagree with this notion that you’re required to read a specific series to be considered as a fantasy reader. Not only this is incredibly disrespectful to countless fantasy authors and readers, but it also speaks heavily of elitism and childish behavior that the world seriously doesn’t need. If you want to feel superior or powerful for having read this series and be condescending towards other people, you should raise your hand to your back and pat your asses three times, because what you just pat is what you’ve become. There’s an unlimited number of amazing fantasy books out now in the whole world, it’s outrageous gatekeep a gate that doesn’t exist just because they don’t follow your Tolkienism. I love sushi, do I have to fish and eat the first fish that popularized sushi as a popular food so that I can be considered as someone who loves eating sushi? What if I had listened to this garbage statement back then? What if I had completely given up back then because of my sour experiences with this book and the fandom? I would be missing on so many grand and unforgettable adventures I received from reading other fantasy books. It may be shocking, but The Lord of the Rings isn’t the only available fantasy books to read.

There is no ‘required’ reading—other than to read ANY fantasy book—to become a fan of a fantasy; it is an illusion made up by elitists who should not be listened to. Also, this is kinda related, I consider Malazan Book of the Fallen one of my favorite series of all time. For years, I’ve been hearing many angry complaints towards Malazan fanatics, and to be fair, some of them can indeed be annoying when they keep on recommending the series even when the series doesn’t fit the reader’s request for a recommendation. This situation, however, is not exclusive to this series. Any popular and famous series will always have a large fandom filled with passionate readers that’s sometimes transformed into fanatics. I’ve had my share of dispute and grievances with some Malazan fans due to their seniority, elitist, and spoilers galore that ended up taking me a long time to plunge myself into the series. Unfortunately, speaking from my experience, the same can be said for those who worshipped The Lord of the Rings and Tolkien, maybe even much worse due to their tendency for gatekeeping.

“Deserves it! I daresay he does. Many that live deserve death. And some that die deserve life. Can you give it to them? Then do not be too eager to deal out death in judgement. For even the very wise cannot see all ends.”

This rambling has gone on much longer than I expected now, and I haven’t even begun talking about what I loved and disliked about The Fellowship of the Ring. That being said, because The Lord of the Rings is technically one big tome divided into three, I prefer doing a full spoiler-free review on The Lord of the Rings when I have finished reading The Two Towers and The Return of the King as well. For now, let me just briefly say that I enjoyed reading The Fellowship of the Ring so much more now than all of my previous attempts. With relatively many fantasy books read now, I was able to tolerate Tolkien’s verbose writing style. If you’re one of those who struggle through reading this book, my advice—if you want to push yourself—is to persevere until Frodo reached the village of Bree and meet Strider. In my opinion, this was the checkpoint where the novel started being engaging. Before that, even reading it now, many parts felt super sluggish; Tom Bombadilo’s singing and sections were pure nonsense that I wouldn’t mind skipping. There aren’t enough praises I can give to Tolkien for the depth of his world-building (remember, this was published more than 60 years ago) and creating some of the most iconic scenes in the fantasy genre that led to a myriad of beautiful fan art like this:

Picture: The Shadow and the Flame by Anato Finnstark 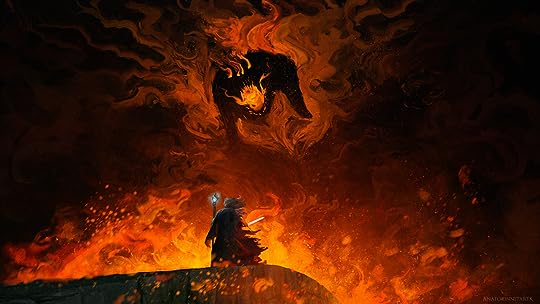 And speaking of iconic scenes, what we read in The Fellowship of the Ring is merely a small taster of what’s to come in The Two Towers and The Return of the King. Although I’m not a huge fan of Tolkien’s prose—the singing was a bit too much, and he uses third-person omniscient narrative which I’m not too keen of—there’s this sense of being transported into another world by reading his writing. Plus, let’s not forget that he wrote some of the most memorable quote; this one is timeless:

“I wish it need not have happened in my time,” said Frodo.
“So do I,” said Gandalf, “and so do all who live to see such times. But that is not for them to decide. All we have to decide is what to do with the time that is given us.”

I am not denying the importance of Tolkien’s role in the fantasy genre; it would be insane to deny that. The Fellowship of the Ring and the next two parts of The Lords of the Rings were and still some of the most important fantasy novels that shaped and made the fantasy genre popular. However, I personally wouldn’t recommend this series as a fantasy-gateway series for people who are looking to get into reading adult fantasy for the first time. Same with all books I reviewed, my rating is based on reading enjoyment, not on a technicality, achievement, or any other external factors. Unlike the existence of The One Ring to Rule Them All, there isn’t one fantasy series to rule them all as a foolproof recommendation. This is also what makes fantasy fantastical and wonderful; it’s truly a favorite genre of mine that is filled with boundless and infinite imaginations. Instead of banishing fantasy readers for not reading/loving The Lord of the Rings, I definitely prefer to welcome them with recommending other fantasy books that, in my opinion, would work for them more. Let’s do better.

“The world is indeed full of peril, and in it there are many dark places; but still there is much that is fair, and though in all lands love is now mingled with grief, it grows perhaps the greater.”

4 thoughts on “Book Review: The Fellowship of the Ring (The Lord of the Rings, #1) by J.R.R. Tolkien”