ARC & Review copy provided by the publisher—Tor.com—in exchange for an honest review.

Gideon the Ninth by Tamsyn Muir

Gideon the Ninth is a damn fine example of why readers’ reviews are incredibly important.

If you have been active on bookish social media, you should know by now that Gideon the Ninth, Tamsyn Muir’s debut and the first installment in The Locked Tomb (or The Ninth House in the past) Trilogy, has been tor.com’s most hyped book of the year. The buzz and praise for Gideon the Ninth has been immense to say the least. Knowing nothing other than the fact that “Lesbian necromancers in space” was stamped on the front of the gorgeous cover art (illustrated by Tommy Arnold), I gave the ARC a try a few months ago only to find myself disappointed by how much it didn’t work for me back then. If I may be brutally honest, I DNFed the novel around 120 pages in on my first read-through. Since then, readers’ reviews have started pouring in, usually resulting in absolute love or disappointment; there’s almost no in-between. But there’s one common consensus shared by both factions: the second half improved significantly. After receiving another copy of this book, a limited edition with black sprayed edges and many goodies, it was only fair that I give it one more try. The result? I enjoyed it remarkably more than I did on my first try. I truly believe that knowing the right things to expect out of this book ahead of reading it will improve the reader’s enjoyment so much more.

Picture: The book and the goodies I received! 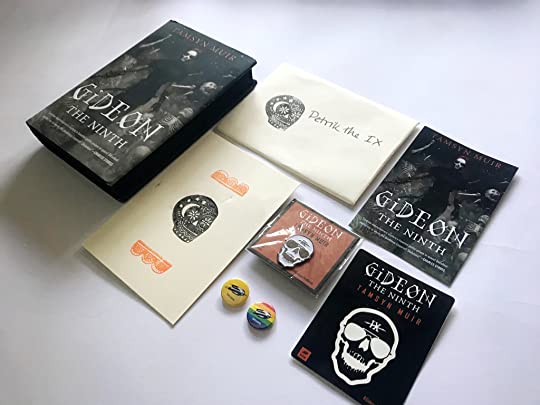 Gideon Nav—or Gideon the Ninth—prepares to escape again but she can’t do it without doing one last service for her childhood nemesis: Harrowhark Nonagesimus. The Emperor of the First House has sent an invitation to all the heirs of each one of his Houses to attend a trial of wit and skill; the winner will become a Lyctor—an immortal and a direct all-powerful servant of the Emperor. Each heir needs a cavalier, a bodyguard, to help them win the trial and this is where Gideon comes in, serving as Harrow’s cavalier. Gideon the Ninth isn’t an easy book for me to review because of the opposite reaction I had in the reading experience of the first half and the second half.

Several readers—myself included—have mentioned that the first half of the book was difficult to get through and I really can’t blame them. In my opinion, the first half was a struggle to read because of how annoying and tiring Gideon’s voice can be to read, which became even more intolerable when the vow of silence was put on Gideon by Harrow and Harrow herself wasn’t in the scenes to act as a counterbalance against Gideon’s attitudes for almost 100 pages. Gideon acted and talked like a juvenile trying way too hard to be funny and edgy and it became annoying quickly. The side characters—excluding Harrow—also took a while to remember and warm up to. Please remember that there’s a character glossary at the beginning of the book to help you remember who’s who more easily; put it to good use. But here’s the important thing, these minor complaints from me, somehow, existed only within the first half; the second half turned the book completely around and headed into a significantly better direction for me.

I honestly didn’t think a turnaround was possible. However, once the story entered Act 3, and the genre shifted more to a murder mystery, I found every single aspect of the book so much better to read. Gideon the Ninth is a bizarre book that doesn’t fall into one specific genre properly; it’s like a hybrid between sci-fi, fantasy, and mystery. I highly enjoyed reading the second half of Gideon the Ninth, because the murder mysteries elements were captivating, Muir’s prose became much easier to follow, the action sequences were awesome, and most importantly the character development—especially for Gideon and Harrow—was terrific. A huge part of why the sudden positive change in reading enjoyment was possible is due to Harrow’s role in the story. I loved Harrow and personally think she’s a much better character than Gideon. What made this even more incredible is that Harrow doesn’t even have a POV to follow; the narrative was told entirely from Gideon’s perspective and yet, Harrow stole the spotlight for me.

“Anyone can learn to fight. Hardly anyone learns to think.”

Also, I have to give tons of praise to Muir’s imaginative action scenes. The deathly army of bones and visceral swordplay unleashed throughout the novel were darkly delightful to read, but the final 40 pages exceeded everything that came before; it was simply glorious. I’m not kidding, a maelstrom of bones, gripping revelations, and cinematic scenes full of twists and turns, flashy swordplay, and extraordinary necromancy created a memorable final sequence that made me incredibly excited to continue to the next book as soon as possible. I want to read more of this necromantic whirlwind. 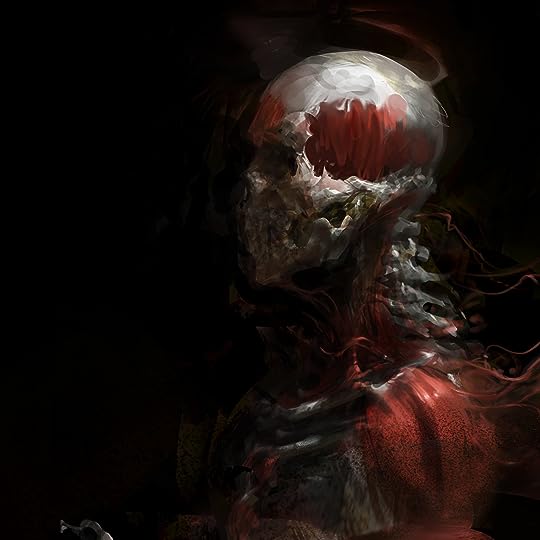 As you can probably guess, I have a contrasting opinion regarding the first and second halves of the novel. However, and this is very important, it’s worth noting that the superbly thrilling second half won admiration and my utmost interest to continue to the sequel, Harrow the Ninth, which obviously will feature Harrow (yay!!!) as the main focus of the story. Imbued with intriguing mysteries, terrifically written swordplay, explosive final sequences, and a lasting impression, needless to say Gideon the Ninth has become one of the most original SFF debuts I’ve read so far. It’s bizarre, complex, imaginative, genres-defying, and distinctively memorable; I am very much looking forward to reading the continuation of Muir’s imagination in Harrow the Ninth.

4 thoughts on “Book Review: Gideon the Ninth (The Locked Tomb, #1) by Tamsyn Muir”