Promise of Blood by Brian McClellan

My rating: 3.75 of 5 stars
Promise of Blood was a compelling and pretty good debut. But despite bringing together amazing Fantasy elements and magic systems, Promise of Blood didn’t blow my mind and there were some details that bothered me a bit (and that I will list below).

Promise of Blood was one of my earliest attempts to read Flintlock Fantasy (after the Lightbringer by Brent Weeks and Mistborn Era 2 by Brandon Sanderson) and I must say, this is a sub-genre I grew to enjoy over the years. In the Lightbringer series, there was mention/use of firearms but it was definitely negligible compared to the “Fantastic” aspect. In Mistborn, the use of magic was definitely predominant. In Promise of Blood, the equilibrium between magic and technology was both satisfactory and enthralling.

Against a backdrop of French revolution, a complex story of revenge, deception, betrayal, emancipation, survival and justice is told from 3 main POVs : a Field Marshal (Tamas), a detective (Adamat) and a particularly skilled soldier (Taniel). Numerous tropes and genres intertwined in the book in perfect harmony : fantasy, military tactics, investigation, religions, politics… You name it! The way Brian McClellan juggled all these elements commended respect.

“It’s a poor commander who gives in to the whims of his troops,” (he) said. “And an even worse one who ignores their wants and needs.”

Promise of Blood had a LOT of great historical and fictional influences. The magic systems were pretty intricate but one of the magics, in its principle, was in a way reminiscent of Allomancy (Mistborn). Thus, I wasn’t very surprised to learn that Brian McClellan has attended Sanderson’s writing classes. But be assured friends! Despite the slight similarity, the magic systems in Powder Mage are totally creative. I also got my fair share of Fullmetal Alchemist vibes. It made me extremely happy because I’m an absolute fan of FMA and it brought me both a nostalgic touch and a sense of closeness to McClellan’s world. 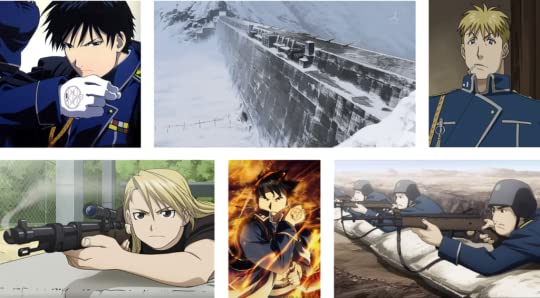 McClellan’s writing was pretty sober and not too sophisticated. The worldbuilding was cleverly done and the historical/mythological/magical explanations were progressively introduced. As the story unfolded, the plot thickened as more protagonists entered the game, some in plain sight, others placing their pawns and tugging at the strings in the shadows. Political intrigues, subterfuges and mysteries within mysteries are enough to keep you intrigued until the final climax.

Then what went wrong ?

Despite all the great vibes and a cast of rather compelling characters, the story didn’t fully grip me. I enjoyed it but I didn’t love it. I was mesmerized when I was reading but when I had free time, I didn’t die to pick up the book again. And it made me terribly sad. Because I wanted to love this book so badly! However:

☹ Some chapters lacked introspection. There were times where I felt very indifferent to what happened to some protagonists. For example, one major character found himself in a dire and kinda tragic situation and he just accepted it. No denial, no despair, no rage. I felt very detached at times and I couldn’t bring myself to fully love or care about some of the characters.

☹ The book seemed like a succession of stories, each one having its closure before moving to the next with usually a 5 (or more) days leap. Which made the whole story a bit disjointed at times. And more importantly, some closures happened so fast, the tension didn’t have enough time to build up fully before it was already over.

☹ The lack of female lead characters! 3 main male POVs and a tiny female POV! Some people may argue that considering the time setting (reminiscent of 18 to 19th century), women didn’t get access to high governmental or military functions. Well that’s precisely my problem: women did get access to important positions in the book. Councils, workers unions, army, powerful sorcery cabals… And yet! Women were mainly relegated to roles of secondary importance, roles of villains or roles of sexual objects (Harems were as natural and common in this relatively modern society as female soldiers. And those were pretty common!)

Why didn’t Ka-Poel get a POV? Why didn’t Vlora or Julene or Rozalia get one? A close friend of mine asked me if women were poorly handled in this book. I honestly don’t think so because some of the female characters showed interesting and promising development and amazing skills so I still have hope for the next books. I just regret that they don’t get as much importance and space than their male counterparts.

Conclusion
Despite these points, this was a very good and enjoyable debut. I loved how some of the main characters weren’t completely good or bad but more like real persons with struggles and doubts and tough choices and with equal potential to cruelty and to honor and kindness and justice. The lore and myths and the way religion was handled in this book were very compelling. I also loved the comical situations and the sassy retorts the author included in his rather brutal setting.

If you’re fan of Flintlock Fantasy (or just Fantasy, really), you will probably love this book! And though it’s only the first book of the trilogy and despite my complaints, I truly recommend Promise of Blood because it has a lot of compelling elements and influences to satisfy a wide range of readers. I just regret I didn’t love it more.