A Dance with Dragons by George R.R. Martin
My rating: 2 of 5 stars

A Dance with Disappointments.

I really thought A Feast for Crows would’ve been the lowest point of the main series. I was wrong because this book didn’t show any sign of improvement. In fact, I thought this was even worse due to the boring setting and unnecessary length of this tome. If it weren’t obvious before, this book displayed Martin’s struggle with writing his main series even more. Realistically speaking, due to the direction of the story in this book, I’m quite confident that A Song of Ice and Fire most likely will never be completed.

“Winter is coming, Jon reflected. And soon, too soon. He wondered if they would ever see a spring.”

Me too, Jon Snow. Me too. I do believe that we’ll get The Winds of Winter eventually, but the planned final book of the series, A Dream of Spring, is indeed a dream.

Picture: A Dance with Dragons by Marc Simonetti 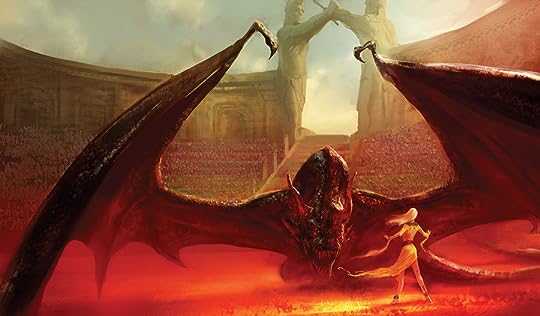 Focusing on a different set of characters geographically, the story in A Dance with Dragons starts simultaneously with A Feast for Crows. It eventually went further beyond the one in the previous installment. How further though? Not by much; definitely doesn’t require a book this massive (400k words) to achieve. The last 15% was great. Yes, once again it ended in a massive cliffhanger—with no sequel in sight—but man the last 150ish (out of 1,100) pages of this book were awesome. The first 85%, however, is a different story.

I honestly don’t have too many things to say other than the parts that didn’t work for me here. The parts that worked for me were so small on the larger scale of things so I’ll start with saying that Jon Snow’s POV was great, I was never bored with his storyline. I consider Bran’s and Reek’s POV a pleasant surprise because I certainly didn’t expect to enjoy their POV that much. Seeing Reek suffered repeatedly gave me immense satisfaction. Cersei’s walk of shame was also incredibly well-written and I felt like Martin was back at his best in this scene. Just like A Feast for Crows, almost all the final chapters of each character were superb. However, to reach them I practically had to REALLY force myself in order to finish this book.

“A reader lives a thousand lives before he dies, said Jojen. The man who never reads lives only one.”

The main reason why I’m disappointed with this one is very simple to talk about: there were too many unnecessary contents. A Feast for Crows and A Dance with Dragons could’ve been easily compressed into one book. The cumulative word count of these two books reached 700k words and yet the actual storyline progressed the least; the content in A Clash of Kings (318k words) alone have so much more significant plot progression compared to these two. There were also too many repetitive phrases. How many times do I have to read the phrases “words are wind,”? I guess Martin was emphasizing how the hundreds of thousands of words in his two books were unnecessary, but still. It was highly infuriating reading Daenerys’s indecisive libido spiraling out of control for hundreds of pages. “I want to fuck him hard,” and “oh no, but I must not show my horniness,” line of thoughts regarding Daario being repeated so many times pissed me off so hard; it felt like I was reading a teenage (technically, she is a teenager I know) angst story that’s usually found in YA books. Plus, I can’t believe I’m saying this, but Tyrion’s POV ended up being one of the most boring POV to read in this book. Not THE most, we have Victarion Greyjoy and the Martell to thank for that, but Tyrion spent almost the entirety of the book getting wasted and asking “where do the whore go?”, to every person he met. C’mon… enough already. Go to a brothel.

No matter how you look at it, proceeding an installment geographically is not a good choice in an epic fantasy. It was very obvious from A Feast for Crows and this book that Martin was stuck in his writing that he had to divide his books this way. Doing this kind of storytelling makes The Winds of Winter extremely hard to write. The characters cast have grown so large—18 POV in this book—pointlessly and now Martin has to make sure that the huge number of POV’s he separated in book 4 and 5 both converged and proceed together in the sixth book. There’s no way he can afford another repetition of the divisive storytelling method, especially when the fans have been waiting for eight years for the next book to come out. Book purists have complained a lot about Dorne’s storyline being cut off the TV shows. I disagree with this. What made this book worse for me was how uninteresting all the story beyond Westeros were. I loved the characters and setting of Westeros; I want to read more about them. I don’t want to read this Meeren, Volantis, Pentos, or Dorne. There’s a good reason why season 5 of the TV show is filled with the content of book 4 and book 5. A Storm of Swords had to be divided into two seasons because there’s so much amazing content in them. Book 4 and 5 is the other way around. When you take away all the repetitive and the boring content, the plot progression of these two books was utterly small and I think the TV adaptation did a better job in making sure the story remains engaging to the viewers.

I may be the odd one here, but I honestly think A Dance with Dragons is even weaker than A Feast for Crows; the pacing of these two books was simply abysmal. I still love A Song of Ice and Fire and Martin’s writing; the first three books in this series were absolutely amazing. I stand by my words that Martin is an extremely important figure in modern fantasy, but this and the previous book were a huge disappointment. I don’t know how Martin will be able to get his series back on track and I sincerely hope he will be able to. For now, let’s just say that I’m glad I’ve read this book because now I can wait for The Winds of Winter without getting my hopes up.