ARC provided by the publisher—Jo Fletcher—in exchange for an honest review.

Priest of Gallows by Peter McLean

Priest of Gallows was addictive and instantly immersive as ever.

Oh my, it’s been two years since I’ve read Priest of Lies, and it’s good to be back here reading this series. For the uninitiated, War for the Rose Throne is one of my ongoing series at the moment, and Priest of Gallows, the third and penultimate installment in the series, is one of my most anticipated books of the year. Peter McLean has delivered another incredibly engaging volume, and Priest of Gallows may just be the most intimate and thought-provoking book of the series so far.

“People may revere the idea of heroic veterans, but they very seldom have the time or the charity for the broken, battle-shocked men and women that are the reality of what war produces.”

Priest of Gallows begins with an iconic first sentence: “One murder can change the fate of a nation.” And from there, we’re immediately back inside the narration of Tomas Piety, one of the most distinctive voices I’ve read in fantasy. Seriously, I have missed Tomas Piety’s narration. So much. I’ve said it times and times again, and another repetition shall be executed; the narration of Tomas Piety is truly one of the standout strengths of the series. I won’t go into any details on the plot because this is the penultimate installment already, and I don’t think I can touch on the details of the plotline without spoilers. However, it will benefit readers to know that this one is the series’ most political installment so far, and it’s all handled incredibly well. I never felt bored reading this book, and it was utterly captivating to me to be reading about Tomas’s struggle with navigating the land and treacheries of Dannsburg. As Tomas said, this is an entirely new territory of conflicts for him, and each step he took led him to deeper troubles.

“The world of intrigues wasn’t my natural environment. I was a soldier and businessman, for Our Lady’s sake. Politics was a foreign country to me, and I would have been quite happy for it to stay that way, but it seemed that wasn’t going to be the case.”

There was a passage where Tomas said that wartime makes more sense than peace now, and to hear that directly from Tomas is a big deal on how bad the situation is for him now. With a boss as smart, ruthless, and intimidating as Dieter Vogel, it is not a surprise that Tomas is facing a lot of struggles. This, of course, doesn’t mean that politics and betrayals are the only things that this novel has it going for. Surprisingly, Priest of Gallows dived inside Tomas’s psyche and feelings more than ever. It is an intimate book; there were several outbursts of emotions that were so heartbreaking and palpable. The past never lets up, and dramatic changes are constantly coming to the life of these characters. They have to deal with it the best they can. Those are the times they lived in.

“Change, as I say. It’s something we all have to make our peace with, in time. It’s seldom pleasant and never easy, but it’s a fact of life and nothing to be done about that.”

We have been in Dannsburg in Priest of Lies briefly, and in here, almost the entire narrative takes place in this city; the city of lies, whispers, and treachery. As I mentioned earlier, this is a heavily political novel, and there weren’t many battle scenes being showcased. But this doesn’t mean that McLean loses the steam power of the narration; dialogues, voices, intrigues were all brilliant. Plus, we still get to witness the terrifying display of cunning. Respect, power, and authority are the lever that moves Tomas Piety, and they’re scarce in Dannsburg. If there’s one thing that I wanted more out of Priest of Gallows, I wanted more interaction between Tomas and the Pious Men. It is understandable, though, that this isn’t possible here due to circumstances and the direction of the story.

“No one is ever simply an enemy, a lone faceless thing to be fought and killed. That was what was drilled into us in the army, to be sure, but that didn’t make it true. Every enemy soldier in any conflict has a family back home, people who love them and depend on them, but the army doesn’t want you thinking of the enemy’s family when you ram a spear through his guts.”

By the way, it was insane to hear that this series was almost canceled. Thankfully, that didn’t happen; the Goddess of Fortune has smiled, and she gave this series a chance to be completed. Publishing books can be a terrifying business sometimes, but those are the times we live in. I would’ve been emotionally distraught if this series was canceled; I love this series, and if it was canceled, I wouldn’t appear as a cameo in this book! Yes, I appear on a page in Priest of Gallows to be brutally murdered. How can I not love this series further? Thank you so much to Peter McLean, or Tomas Piety, for this honor.

Here’s the passage that depicted the murder: 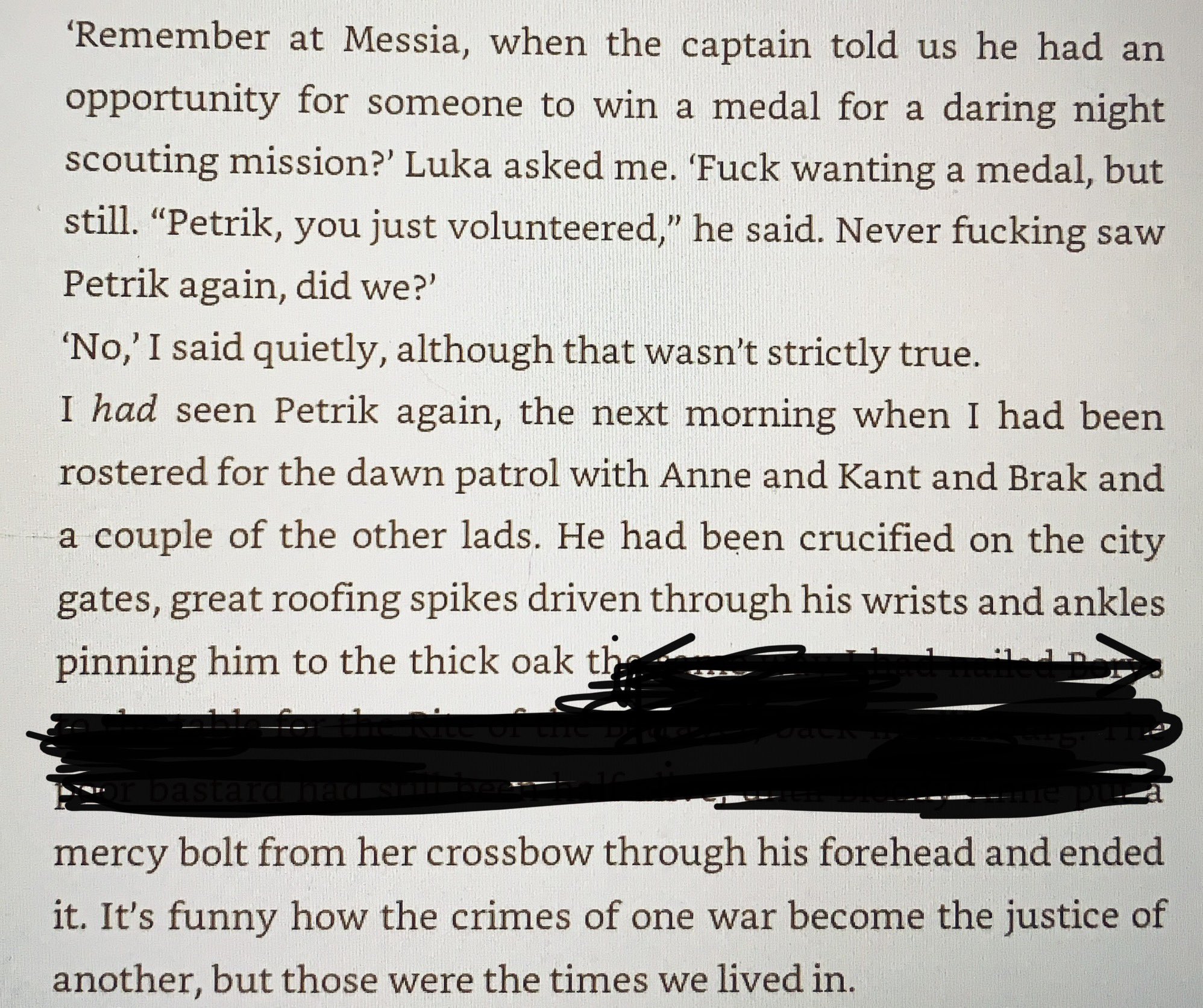 Priest of Gallows is another thrilling work by Peter McLean. In addition to constructing the most thought-provoking narrative of the series so far, Priest of Gallows has also set the stage for a memorable climactic finale. War for the Rose Throne has only one book left, and I’m sure there will be no peace in it. Can McLean pull off the magnificent conclusion to the series? I’m sure he can. As Tomas Piety would say, he’s the right person for the right job, and he’s the right messenger for Tomas Piety’s story.

You can pre-order the book from: Amazon UK | Amazon US | Book Depository (Free shipping) | The Broken Binding (Use my code: NOVELNOTIONS121 for discount!)