“The building was on fire, and it wasn’t my fault.”

As if anyone would believe that, Harry.

Chased by flaming poop of flying monkeys, tasked to work in a porn filming industry as a production assistant, and dealing with vampires; Blood Rites, the sixth installment in The Dresden Files series, hasn’t stopped Harry Dresden’s life from being filled with chaos, excitement, and suffering. Unlike Summer Knight and Death Masks where the repercussion of the conflict seemed more global, Blood Rites takes the story structure back to the cases based storyline of the first three books. The strong focus on developing relationships of the characters, revelations regarding Harry’s family, and the importance of love in Blood Rites really made it one of the better entries in the series so far.

“Love is another kind of power, which shouldn’t surprise you. Magic comes from emotions, among other things. And when two people are together, in that intimacy, when they really, selflessly love each other it changes them both. It lingers on in the energy of their lives, even when they are apart.”

I think one of the most enjoyable parts of reading this series is to witness how far Butcher has developed as a storyteller. I know I’m only six books into this long series, but the differences in quality have improved exponentially since Storm Front and Fool Moon. I didn’t find myself too invested in the main story here, but the characters and their development were superb, and they’re the ones who kept me entertained. For six books now, Harry and Murphy’s relationship and the trust they have with each other have been developed in a very gradual style, and this situation can be applied here. The highlight of this book, though, for me was Thomas Raith and his characterization. There’s quite a lot of new information to learn here; don’t let the cases story structure trick you into thinking this is a filler installment; it’s not. I also loved that despite having a life full of hardship, Harry Dresden always managed to rises from it stronger.

“The world might be vicious and treacherous and deadly, but it couldn’t kill laughter. Laughter, like love, has power to survive the worst things life has to offer.”

I know I’m being repetitive about the next thing I’m going to say, but unfortunately I stumbled upon the same issue once again. It’s definitely subjective, but I kept on feeling that the action scenes in some sections still felt too long for its own good. This has happened at least once or twice in each installment, and it happened once again here. I hope this is something that I’ll find being improved in the next books because I do enjoy reading this series so much, and it’s a bit sad that there’s always one or two action sequences where I became a bit bored.

“Jobs are a part of life. Maybe you’ve heard of the concept. It’s called work? See, what happens is that you suffer through doing annoying and humiliating things until you get paid not enough money. Like those Japanese game shows, only without all the glory.”

Blood Rites is hilarious, wholesome, and imbued with revelations that would be pivotal for the continuation of the series. So far, out of the six books in the series that I’ve read, I definitely laughed the most reading this one. A huge plus, there’s a puppy here! I look forward to reading the next one. 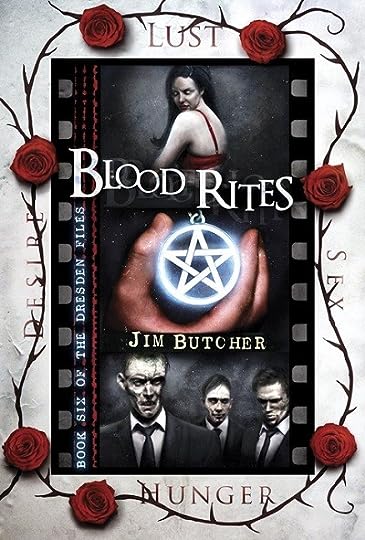