The Blinding Knife, the second installment in Weeks’s Lightbringer series, successfully excelled over the previous book. On my first read, I remember that I chose The Blinding Knife as my favorite installment of the series; it seems like I’m going to stand by this notion on my reread. There are many reasons to love The Blinding Knife; multi-layered intrigues in its politics, superb pacing, incredible character developments and intricate expansion to its world-building, to name a few. In the first book, there was quite a lot of pages—necessarily—spent towards the purpose of making sure the reader truly understands the mechanism behind the complex magic system; that info-dumpy section is gone now, everything flows naturally in The Blinding Knife because the concept and rules of the magic system has been established clearly in the previous book. Weeks took every foundation firmly planted in The Black Prism and gradually built upon them wonderfully here. 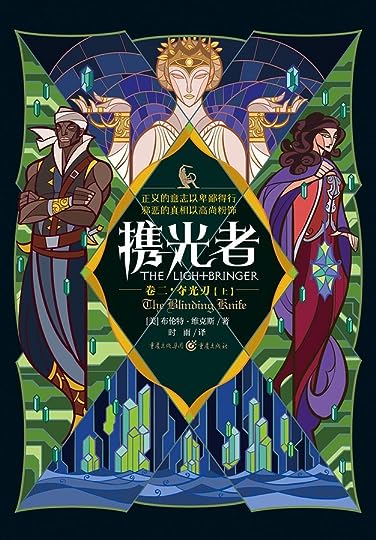 One of my favorite elements being introduced in The Blinding Knife would have to be the implementation of the military school story arc into Kip’s life. I know I’ve said this countless times throughout my reviews already, but I really have a soft spot for coming-of-age fantasy that uses magic/battle school trope; I simply can’t get enough of them. I honestly believe that magic/battle school trope is a terrific plot device that’s immensely suitable—not to mention also comfortable to read—to build a young character to maturity. Kip the Lip, Kip Almost, or Kip the Breaker; The Blinding Knife starts to carefully shift Kip into the central role of the series. Seriously, the character development—both physical and mental—that Kip had in this book during his Blackguards enlistment story arc was just awesome. I can’t help but found myself cheering for him so many times; he’s annoying, hilarious, and believable. Plus, we also get to see Kip building relationships with old and new characters which effectively heightened the quality of the series, not just in characterizations but also in world-building and plot complexities.

“If you are not free to say no, your yes is meaningless.”

Two characters—Andross Guile and Teia—interact with Kip a lot of in this book; these two characters ended up being two best characters highlighted in this book and more. Andross Guile is honestly one of the most intimidating characters I’ve ever read in fantasy; he has so much palpable power in his actions and words and it can be felt within all his appearances. Seeing Andross playing The Nine Kings (an in-world game inspired by Magic the Gathering) against Kip constantly was utterly entertaining. What made this duels even better was the fact that it was used to build both of their characters and also to shed light further into the history of the Lightbringer and the in-world game itself. Of course, this doesn’t mean that only Andross is the only Guile that’s worth highlighting; Gavin Guile and Karris’s relationship development was endearing and compelling. Without spoiling anything, let’s just say that many events happened between these two, and I found the progression of their relationship a beauty to witness.

“Love is not a whim. Love is not a flower that fades with a few fleeting years. Love is a choice wedded to action, my husband, and I choose you, and I will choose you every day for the rest of my life.”

And then there’s Teia, there’s no way I would conclude this review without talking about Teia; in my opinion, she’s the best female character Weeks ever wrote. It’s not strictly because she has a harsh past and I wanted her to overcome it, or because she has personality that’s easy to root for and her relationship development with Kip and friends were great, but it was also because of her ability as a Paryl drafter that made this book exponentially fun to read. I think Weeks has done a great job of using Teia to expand the magic system of this series, every moment where Teia appeared captivated me and it made me crave for more usage of Paryl drafting.

On the opposite spectrum of Teia, unfortunately, we have Liv, which annoyed the hell out of me. I won’t lie, I found her actions and behaviors more understandable now on my reread, but I seriously found myself annoyed by her decisions and self-righteousness. I actually wanted to read the Color Prince’s POV more than her; it would be interesting to see what goes on inside his head because he’s so devious and cunning with his words rather than being inside Liv’s as she tries to convince herself that all of her fatal actions are right. However, this could actually be the purpose of Liv’s character, to show how deadly the power of blind devotion and faith can bring, and on this Weeks nailed it precisely well.

“Idealists mature badly. If they can’t outgrow their idealism, they become hypocrites or blind.”

In this seventh and final paragraph of this review, let me just put it simply that I loved The Blinding Knife more than The Black Prism; it is truly spectacular, contain no shortage of exhilarating twists and turns, and I consider The Blinding Knife to be the height of the series—the next book, The Broken Eye, comes very close to it—so far. It would be a challenging task for Weeks to top what he crafted here. The month of OctoBRENT continues; two books to reread and two weeks left until the final book of the series, The Burning White, is released to the world. I move forward with my adventure in the Seven Satrapies and I’m excited to eventually find out whether The Burning White or maybe my reread of The Broken Eye will top this one or not.