The Crimson Campaign by Brian McClellan

The Crimson Campaign is the second book of the Powder Mage trilogy and it picks up a few days after the last events of Promise of Blood. The story is still told from 3 main male POVs and a smaller female POV (that is gaining in importance).

The Crimson Campaign was really, really good. Brian McClellan showed in it some of the great potential Promise of Blood hinted at!

So why not a 5 stars rating, one would ask ?

Because, while addressing some of the issues of Promise of Blood, The Crimson Campaign still had some flaws (for me) and I’ll explain the ones that bothered me. 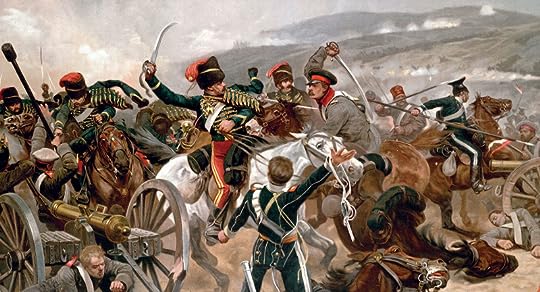 But, first things first, let’s start with the positive things.

♡♡♡ The number of tropes and sub-genres used in this book and series in general was staggering. Fantasy, military, politics, religions and mythology, mystery and detective arc… It’s brilliant, truly, to juggle so many elements in the same story.

♡♡♡ The storytelling was very different from the first book. While Promise of Blood felt more like a collection of successive stories, here the narrative was more linear. The story was like a long journey for all the POVs – literally for one of them. Whether it’s a journey to save loved ones, protect one’s country, prove oneself or of self-discovery, each one had its own tone, suspense and unexpected twists (except the female POV that fell flat for me and didn’t bring much to the story). The book was well structured with a lot of epic battles and fighting scenes (both with firearms and with magic) well distributed throughout the story.

“Let them stack the odds against us. Let them come upon us with all their fury, because these hounds at our heels will soon know we are lions!”

♡♡♡ A lot of characters transcended the potential McClellan already gave them in book 1.There was a meticulous development for both Tamas and Taniel (2 of the main POVs) that made these two great characters so real, so human, so relatable at some levels. Tamas with his complicated and tortured past, his stubborn and unyielding will and audacious military genius. Taniel with his demons, guilt, arrogance, integrity, insecurities and incredible skills. And both animated by the determination to save the people they cared about. But the amazing characterization also touched the protagonists that didn’t even have a POV and yet, were lovable and fully-fledged : Ka-Poel, Mihali, Olem, Bo, to name only my favorites. Adamat’s POV on the other hand, well, let’s just say it stayed true to itself. Meaning it alternated between surprising/intriguing/fast paced and extremely boring and insipid.

But despite the amazing improvement, here are some details that made the book definitely less enjoyable than I’d have expected:

☹ I already pointed out in my review of Promise of Blood that I missed interesting and influential female characters in the book. And that was a common complaint about the series in the reviews I read. In The Crimson Campaign, I had the feeling that McClellan obliged by shoving countless women in our faces. A bodyguard? Woman. A despicable Major? Woman. An even more despicable General? Woman. A healer? Woman. A Union counselor ? Woman. A rebel leader? Woman. I can go on and on with the list. It felt incredibly forced. I wanted believable, strong but most importantly well developed female characters, not countless minor, forgettable or teeth-grinding ones.

☹ Some of the dire situations were solved with sheer luck, especially in Adamat’s POV. Too many lucky coincidences, too many convenient character backgrounds and skills. The same goes for the ending in one of the main POVs. After all the building tension and the impossible odds, the ending was so underwhelming and disappointing. Also, some twists were incredibly easy to predict (because there were huge hints handed out throughout the story).

☹ Aside from the Powder Mages’ magic and the Knacked’s abilities, we still didn’t have clear explanation of the other magic systems. How did Ka-Poel learn that much potent sorcery? What are the specifics of her magic? And how do the Privileged manipulate the elements? What made the Predeii such powerful sorcerers? What’s Kresimir and Adom and the other Siblings’ real background? etc etc…

Conclusion
Despite my minor (?) complaints, The Crimson Campaign was a very engaging and original book. I really enjoyed the read, especially Taniel and Tamas arcs. There was a more defined direction and purpose to the book considering the high stakes. The epic battles, the heroic acts and a lot of emotional moments finally got me more invested in the story.

One thought on “Book review: The Crimson Campaign (Powder Mage, #2)”