We Ride the Storm by Devin Madson
My rating: 5 of 5 stars

A new gale of hope for self-published fantasy blows with all its might as Devin Madson summons a new triumphant tornado in We Ride the Storm.

Open up your thesaurus and look up the word “underrated.” Devin Madson’s name truly belongs there. I bloody loved this book, even more than all of Madson’s previous works which were great themselves. You can check my review history and you’ll see that for self-published/indie books that I’ve read and reviewed so far, I’ve given a full 5 stars rating (without rounding up on Goodreads) to literally only one book, The Mirror’s Truth by Michael R. Fletcher. We Ride the Storm is the second occurrence.

We Ride the Storm is the first book in Madson’s newest series, The Reborn Empire. It takes place more than a decade after the end of Madson’s previous trilogy, The Vengeance Trilogy. The story this time felt more epic in both scope and tone and it was infused with efficient storytelling and addictive pacing that never neglects crucial characterizations. The first chapter immediately introduced us to the Levanti culture and their method of equality in honoring the dead in the name of their god, Nassus. The method? Decapitation of the head in the most vivid and intricate descriptions of the act that I’ve ever read. Madson has become a grim goddess of infusing palpable tension into the scenes within each chapter. I’m serious, every page was fantastic to read and brilliantly paced. Almost every chapter was well-structured and given its own start, middle, and climax sequences, which made every sentence a constant propulsion to continue reading. Every single chapter has important scenes that function as a fuel that pumped adrenaline through my blood.

“Even the smallest cog is important in the workings of a clock.”

The magic system from Madson’s Vengeance Trilogy—Empathy—didn’t play a role here but my empathy towards the characters was real; I was trapped in a turbulence of feelings and I enjoyed every moment of it. The emotions imbued into these pages can truly be felt and the circumstances forced upon the characters truly made me care about their journey, which is the most dominant sign of a fantastic book for me. When the characters’ actions truly make me grit my teeth and drop my jaw several times, it’s a sign that I’m drowning in a maelstrom of marvelous pages and I don’t want any lifeguard to save me. Madson achieved this result by making sure that the characterizations were extremely well-written. I thought it would be hard to move on from the characters in the previous trilogy but I was proven wrong immediately. Starting from the first three chapters, I actually enjoyed reading the new set of characters’ POV even more than those before. Same as Madson’s previous trilogy, the story was told from three characters—Rah, Cassandra, and Miko—perspectives in first person storytelling narrative. Despite being told in first person narrative, all three of them have highly distinct inner voices and cultures. I thoroughly loved reading each characters’ perspectives; they all hold the same crucial and prominent weight in helping the book to reach its peak level of greatness. However, my favorite characters were definitely Rah e’Torin and Miko.

Rah e’Torin, the leader of the Second Swords of Torin, has an inspiring code of honor that tells a story of survival. After being exiled, Rah and his herd of Swords have been forced to act against their codes in order to survive in a foreign land. I absolutely love Rah’s POV; all of Madson’s characters have a grey moral compass but Rah is the only protagonist that has a truly good moral compass, despite the gruesome actions he had to do. He was like a light in the darkness of Madson’s world. Not that I mind the bleak and the grim tone, I adore them actually, but Rah (and Miko) did bring a new complexity and some positive aspects to the book that were not present in the Madson’s previous works, they give the readers someone truly worth rooting for in her series.

I have no doubt the book will be well-received by a lot of readers. But for me personally, the book reached a new level of quality because I had already lived through the world-building and histories of the book because I have read all of Madson’s prior works already; the result was tremendously impactful in enhancing my experience reading this book, especially during Miko’s POV. Her POV was filled with massive bonuses and homage for anyone who has read Madson’s previous books. This doesn’t mean that you have to read them to understand but it would absolutely be beneficial in enriching your experience. Not only did a lot of familiar faces and names make an appearance, but for instance, there was also one character’s farewell scene in the book that simply won’t be as significant and poignant if the reader hasn’t read The Vengeance Trilogy. As for Miko herself as a character, she’s such an empowering female character. Unlike Hana from the previous series, I found Miko to be non-infuriating and a much more engaging character to read; I was truly invested in her struggles weaving through the court politics of Kisian Empire. In a place that’s heavily ruled by men, she simply won’t bow down and her gradual character development was truly spectacular, making her easily one of the best heroines I’ve ever come across in my fantasy reading.

“Lesson number four. Sometimes those who seek to help you are the worst enemies of all.”

Like a serrated blade that thrust its edges into my heart, threats and perpetual tensions were reflected not only in the battle scenes but also in the compelling dialogues. The last 100 pages of the book were a final gale of pulse-pounding rides and converging perspectives that solidified my reasoning to alternate my reading between traditionally published and self-published fantasy novels.

When you’ve read a lot of the popular, highly-acclaimed adult epic fantasy, you’ll probably notice that the majority of them are set in a Medieval European setting. I don’t have a problem with the setting but it’s always gratifying to find an incredible trilogy written by an author who is brave enough to stray from the popular setting. All of Madson’s books are powerfully Asian-inspired, taking a lot of inspiration from Feudal Japan. The setting and environment were utterly vivid and the prose made me feel like I was totally there inside the story.

Madson’s prose has always been great, but here? It was even more meticulous and immersive than before. It astounds me how she keeps on getting better with each new installment. This book is definitely Madson at the peak of her career so far and I expect to see her improve even more in future installments. With every sentence she crafted, she displayed her wonderful skill as an author. For example, the way she utilized the effectiveness of the word “silence” and the deafening of sounds to create “A calm before the storm” or “sunshine after the rain” situations were absolutely first-class. The pacing between lulls and tense moments was masterfully executed to create several memorable scenes. Plus, the philosophical lessons on what it means to be a leader were profoundly relatable.

“Do not make assumptions about things you know nothing about. An emperor serves his people. The day the people serve the emperor is the day the empire falls. Remember that, Miko, if nothing else. War profits no peasant.”

I finished binge reading ALL Madson’s published works (four novels and one novella) within nine days and I must say, it currently is hands down the best experience I’ve ever had with self-published books. Being inside her imagination was a bloody and delightful experience and I can’t believe I don’t have any more books written by her. Now that I own and have finished everything written by her so far, I plan to do the same with every single of her future works. Usually, when people asked me to recommend top-notch female fantasy authors, I always recommend Robin Hobb, Rebecca Kuang, N.K. Jemisin, and Rachel Aaron. But now, I will definitely be putting Devin Madson on that list. Together with The Poppy War by Rebecca Kuang, Madson’s books currently sit at the top of my recommendation list for anyone who’s looking for an impeccable Asian-inspired low-fantasy series. Also, none of Madson’s books received anything below a 4 stars rating from me, which I think speaks volumes for her work.

Seeing that this book is also an entrant in this year’s SPFBO (Self-Published Fantasy Blog Off) competition held by Mark Lawrence, it’s only fair that I enlighten you with a few personal statistics before I close this review. I’m not a judge for the competition this year but based on my assessment, this book has a strong chance of becoming the champion or at least ending up in the final round’s top three. I’ve read the majority of the past top books and champions of the competition, and in my opinion We Ride the Storm triumphed over every single book and top contender I’ve read within the history of SPFBO; this is in fact the first full 5 stars rating I’ve ever given to a book that’s been entered into the competition. Luck is definitely a heavy factor in SPFBO but regardless of the result, I’m genuinely confident that this is a book that will win the hearts of many fans of the genre, as it has definitely won mine.

Combined with the experience of reading her Vengeance Trilogy, We Ride the Storm has given me a whirlwind of emotional temerity to chant that Devin Madson deserves a crowning achievement not only for self-published fantasy but for the entire genre of character-driven grimdark fantasy. She has now become one of the very few indie authors whose careers I’m willing to follow. Bravo, Devin Madson, bravo. We Ride the Storm is a breathtakingly triumphant book. Not only is it one of the two best self-published fantasy I’ve ever read, it has become one of my favorite books of all time. This book is truly a serendipitous and glistening hidden gem oozing with brilliant cinematic set pieces and a gripping, evocative hurricane of emotions that constantly took my breath away. Buy it and read it as soon as possible. You can thank me later.

Picture: My copies of Devin Madson’s books. Look how gorgeous they are! 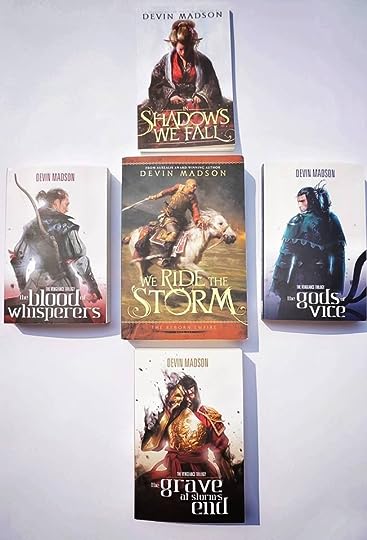