A deviously dark and thrilling tale, Nevernight is the first book I read by Jay Kristoff and I loved every murderous second of it.

The protagonist, Mia, is a girl bent on revenge, hoping to make the cut in a fabled assassin school called the Red Church. The story starts off with her making her first kill which will serve as a tithe to the Maw.

“…the Maw. Niah. The Goddess of Night. Our Lady of Blessed Murder. Sisterwife to Aa, and mother to the hungry Dark within us all.”

The Maw is the goddess of the Red Church and Mia’s tithe will serve as her entry requirement to this elite school. Her Shahiid, Mercurio, has trained her as well as he was able to, but now after her first kill, it is time to further her training and to journey to the school in the hope of becoming one of the elite and feared Red Church assassins, all to serve her ultimate goal: revenge. Upon arrival though, she sees that she is not the only apprentice with high hopes and bloody ambitions. Twenty-eight have been sent. Four will be chosen as Blades (assassins), the rest as Hands (servants). Competition is cutthroat. Literally. Mia has no intention of becoming a Hand, and luckily, she has a rare advantage over the rest of her fellows. She is darkin. Touched by the night, Chosen of Niah, the Black Mother, she has power over shadows and has a friend who is always by her side. Her not-cat or shadow-cat aka Mr Kindly. And together they are a wickedly formidable team.

“I’ve heard tell darkin can steal the breath from your lungs. Slip through your shadow and kill you in your dreams. Maw only knows what the daemons who serve them can do.” 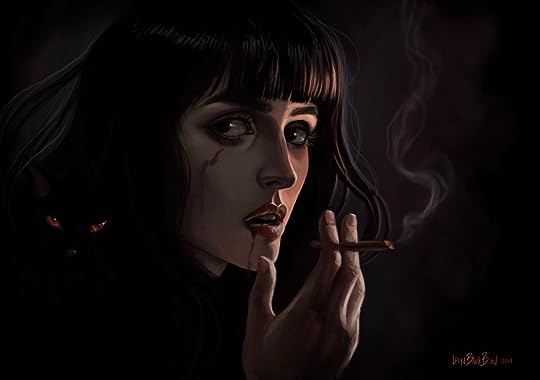 Mia is such a fascinating character. Set on becoming a murder maestro in order to visit retribution on those who have wronged her family, she is intent on doing anything to reach her goals, but soon realizes that this might not be the way and becoming a blade may take a harder toll on her than she is willing to pay. If she does not hold on to the very few things that matter to her, the Red Church will change her into an unfeeling monster, a killing machine and she will lose everything that makes her who she is, becoming more like those she hates with every fibre of her being. All the other characters, be it teachers, fellow students, antagonists or even shadow cats – round out the cast beautifully and had me completely invested in the story; the reasons that they do what they do is as spellbinding as anything else on display, and there is much on display.

“The books we love, they love us back. And just as we mark our places in the pages, those pages leave their marks on us. I can see it in you, sure as I see it in me. You’re a daughter of words. A girl with a story to tell.

For starters, all the mentioned lore and history of this world is as mesmerising as the plot and I am on tenterhooks to learn more of it. (Don’t worry, no info dumps – just clever writing) Jay Kristoff has parcelled out enough bits and pieces that it hints at a much larger world, rich in diversity and brimming with untold tales. To tease with a taste, in contrast to the dark tone of this story, we have a world where it is almost never night, and the time of day that qualifies as night (even though it is not dark,) is aptly called Nevernight. There are three suns in the sky and between them, they ensure that Truedark only arrives once every two and a half years. But there is so much more… The Luminatii aka the bad guys (Well I guess bad guy is just a matter of your point of view?) or religious nuts have swords that light up in searing flames, fitting as they have been blessed by Aa to be the light of the world against the threat of the dark, those who worship Niah, the patron goddess of the Red Church. And then we have the city Mia grows up in which has been built beneath and also using the skeletal remains of a giant unknown beast or god (who knows what, and not helping the matter is the fact that the skull is missing), the myriad horrific creatures such as Sand Kraken (shudders) and Book Worms (WAY scarier than it sounds), and many more varied characters inhabiting this enthralling world. Truly, my list could go on and on.

And oh the action, gentlefriends…

But no spoilers here. 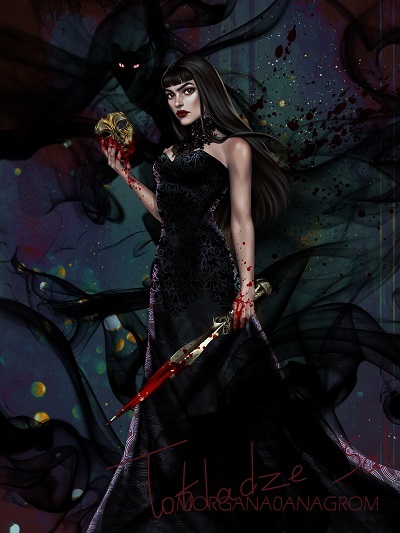 Whilst the story might at first sound somewhat familiar being that age-old, but well loved fantasy trope of revenge, and on top of that mixed in with a school for the gifted, (as catnip is to cats so are schools for gifted/wizards/assassins to this reader) the author has somehow made Nevernight feel entirely original and unique and the writing makes no bones about it right from the start. I was vexed in the opening chapter as the story starts off being told from what seems to be two alternating perspectives, but with slightly differing experiences, showing us similarities between two vastly different acts. As weird as that sounds, it is superbly done and an excellent bit of writing that I have not seen before. Past that initial confusion, the story picks up the pace and sucks you right in, building steadily as you close in on the last third of the book and then venturing into unputdownable territory from there on out. I had a very late night thanks to those final ten chapters. Oh, and it would be remiss of me to omit that this book was also the first instance I saw of the use of formatting text in a specific way to convey a specific action, and it is brilliantly executed, just another tick on my list of things to love about this tale.

As for any possible issues, I would point out that a few other readers have complained about flowery or purple prose, and some have even lambasted the writing for it. I confess I might have rolled my eyes at a sentence or two in passing, but it’s hardly something to kick a fuss up about; I rather loved the writing in its entirety. If there is something that will putt some readers off it will surely be the footnotes added in every chapter. I think they are a stroke of genius, adding commentary/remarks/anecdotes throughout the story and aside from a few of them maybe being a touch long, they add heaps of wicked humour through a delightful narrator, and the author also makes clever use of them to expand on the worldbuilding without being info-dumpy. 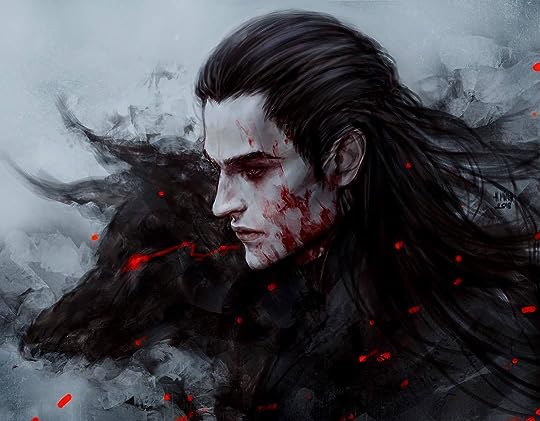 To cut straight to the heart of it – Nevernight is dark, delicious & wickedly captivating entertainment that kept me enthralled throughout. If you have not yet read it, I hope I have convinced you to give it a chance. I will most definitely be rereading it for years to come, and have already done so a number of times.

“You’ll be a rumor. A whisper. The thought that wakes the bastards of this world sweating in the nevernight. The last thing you will ever be in this world, girl, is someone’s hero.”